Information technology is important and indispensable to the life of human beings. Transmission, recording or memory and processing of information are three essential processes of information. Libraries are the backbone of all information sciences. Virtually, the information technology has been changing everyday. The basic challenge of the coming decade is how to make the already available technologies as useful and friendly to a user as the telephone or television set is to the common man. 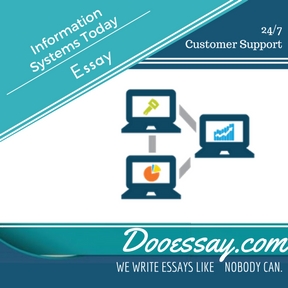 Computers a major segment of the new information technologies. The phenomenal growth of semi-conductor technology and the proliferation of the semi-conductor memory devices has brought into the society computers that they can carry personal computers that can do anything for you, say record a message and phone back an answer. With the help of satellite communication, the transmission of data has become very fast. The data can be telexed, the voice over a telephone can be transmitted on local, national and international net work. The transmission of images through technology that’s via a T.V. is again going to be a major challenge, as how to combine all these three components of information technology into one. It would involve creating various problems. Firstly, the privacy that goes with it. For further add to the impact of communication, if one can switch over from,voices to images and data depending on an individual’s need.

It is major challenge before the society at large and the library professionals as to how compress a library into a computer. Moreover, one the user’s part it is not easy to sit at a terminal and read. Basically some psychological and social changes have to be in built in .the minds of the young children especially, so that they grow up with the habit of reading on a computer screen. It is also a fact, that there had been a proliferation of a large number of computers. They are used a sophisticated typewriters. If one probably asks somebody, as to who is the actual user of the computer, it is probably the secretary. A lot of PC’s have dust covers on them and one cannot be sure how frequently they are removed. It is a strange phenomenon that people haven’t come out of their “hangups”, The terminals or keyboard of a Personal Computer is looked up as an extension of sophisticated typewriter. Also there is an attitudinal barrier in sitting and typing out the matter, which needs to be overcome.

That’s why, the advertising expenditures have to be toned down to a certain level of reality. Worldwide there is a competition going on as to how quickly you can gather, disseminate or transmit the information. There has been a tremendous bombardment of information from all sides. As the demand grows from the public to share’ the information at the same time, every section of the society is demanding more and more its share of message that goes across. Besides, the homes have been invaded with the message of consumerism – information about goods, marketing, politics, etc. The young tender minds of the children share gently massaged to all this. It is going to be long struggle to convert all the paper knowledge into the electronic medium. Moreover, if we want to solve the literacy problem, the computers may help in self-learning. The revered place of Guru will be taken up by a personal computer, as whatever one will see on the screen will become a reality Why should anyone go to one’s parents or teachers when the PC can provide answers to all your queries? .. Already, the latest PC is there in the market in the United States which can store a full encyclopedia in it or the complete works of great men.

With the dissemination of information, the hierarchical structure of the organization breaks up. There is no need of various layers of management to perform the varied tasks they were earlier used to do. During the last decade it was professed that one should control management. In the 70’s there was the concept of controlling finance. Today, the dissemination of information through various medias has to be managed. With the advancement of information technologies, there is a danger of creating various problems. Firstly, the privacy that goes with it. For maintaining the law and order, it becomes necessary as to with whom does the pow.er decision rests and what details one should part with? Thus if the details about a culprit have to be fed into a computer with various information’s, one of secret nature has to be routed through the channel.

Moreover, another limitation is that it would individualize the society. Besides, it is against the very concept of communication, which is a two-way process. With new information technologies the kids will be sitting at the terminals and derive knowledge, which at times could be impracticable… Some people suggest that micro-electronics and the other technologies have produced a symbiotic effect on both the computers and the communication. It is being feared that the industrial revolution increased the capability of man by substituting muscle power with machine. The new information technologies will substitute the human intelligence with machine.

There is a greater versatility wide range of applications, tremendous decline in cost and energy. This technology will influence the home and service sector also. The’ tremendous advances in semiconductors, digital communication systems, computer applications and its invasion into all walks of life, the successful commercial utilization of light transmission techniques using optical glass fibre and the vast potential of putting satellites in orbits and retiring them; has given the hope that bringing the fruits of communication technology to the doorsteps of the humankind at large will be fruitful.

From the micro-electronic chip to the micro chip and the micro processor functioning on the principle of computer, working on the hexadecimal code, this tiny configuration of electronics could work wonders. The proliferation of semi-conductor memory devise has brought into the society computers that one can carry. personal computers can do any thing for you like sketch a new cartoon or answer a phone call etc. There are various anxieties that are raised. The machine is only a complementary means to our activities for information procession. But will this lead to any attitudinal change to work of the human beings, as they are. Even with the best of the infrastructure, the libraries today are caught in the bureaucratic web, as the line in control of order follows from the Director, who is considered to be the custodian of all the materials.

The information technology emanates from five disciplines or sources, namely the computers, communications, electronics, artificial intelligence and the human interface. Electronics is associated with the radio, television, audio systems and computers. Almost every aspect of lite human life is directly or indirectly associated with the impact of electronic technology. In the 1940’s there used to be radio sets, that had a vacuum tube, which has been replaced today by the integrated circuit. A technological advancement is gauged by the power it gives or the energy it consumes and the cost that is involved. The technology that was prevalent in the 1940’s used to be about 100 percent costlier and about 1000 times energy consuming. Indian electronics industry during the early sixties started manufacturing radio receivers by public sector and private firms. Electronics in turn has revolutionized the computers.

Today, in the field of digital communication, there is digital transmission, digital switching and signaling that is taking place. The progress of the digital techniques. mainly contributed by computer’s development and the progress of digital transmission system based on it have merged computer and communication. It has made possible the realization of the three basic functions. i.e. the transmission memory and processing in simple form. And also to realize further advanced and more complicated systems. This progress has given us many useful means to better our social life.and welfare.

Electronics has accelerated economic progress, the increase of efficiency and the promotion of welfare in modem industrial societies. Today, we are living in an information-oriented society. The human or man-machine interface is very important including tele-inspection, telecommuting; etc. Also there will be an exchange in terms of natural language interface. There are the office automation machines typically designed for the top executives, who need not touch a key-board. The computer will respond to the demands of the boss. Thus the libraries will have floppies and not megatapes. The whole concept of primary, secondary source, etc., will change tremendously. It will be a more individualized society. In five year’s time, telecommunication network in most countries would become more efficient and would match up to the international standard.

The telecom revolution which is fast gaining ground will be heralded with indigenous know-how and technology in many developing countries and not by allowing import of such technologies which are quite irrelevant to modem conditions. Indian scientists and technocrats are trying to achieve by breakthrough in telecome sector by restructuring programmes on the anvil. The telecome commission, would consolidate by 1990, 500 documents after extensive survey, which would spell out the strategies which should be pursued to revitalize the telecome sector. By 1991, these strategies would be implemented in a phased manner.

Indian scientists and technocrats are trying to achieve by breakthrough in telecome sector by restructuring programmes on the anvil. The telecome commission, would consolidate by 1990, 500 documents after extensive survey, which would spell out the strategies which should be pursued to revitalize the telecome sector. By 1991, these strategies would be implemented in a phased manner. The time is not ripe for deregulation of serves in. India. Major district headquarters are yet to be brought under STD network, These are the basics and crucial issues now. Business network no doubt is important, but cannot be assigned as much priority as to the basic tasks.

The government have taken steps to deregulate the production of telecome equipment’s. Over a period of time, the share of ITI in the production of telecome equipment’s would be substantially reduced and the private sector would have a major role to play in such activities. There is need for evolving an information culture in the country. Openness to information and accessibility to the source of information are the key factors for evolving an information culture. Against this, the present work culture in the country is feudal and hierarchical. Information is often not put to the optimum use. Therefore, the major challenge is organizational and people at the bottom have to be given operational freedom .

With the digitization of the network, setting up of the international gateway and the proposed commissioning of the public data network, the country is well poised for exploiting the full benefits of the information revolution,What is of concern is time and costs. The network services needed to be made available as fast as possible. Equally important would be to price these services at reasonable levels. As a first step, private networks and newer types of services for privatization should be considered. The policy package must be such that it encourages private sector participation. The leased circuits must bear reasonable tariffs. Interconnection with public network must be permitted. There should be no restriction on data communication and switching.Equally important would be to close the technology gap and take a lead. It is necessary that R&D efforts are concentrated right now on ISDN services. The only way to overtake the rest of the world is to work for a quantum jump and not follow the reinvention route.