The Educational value of Broadcasting Essay

In the Western countries, the radio is considered to be one of the most powerful instruments of education. In Pakistan a majority of listeners go in for it to listen the recorded music. The average Pakistani feels bored by literary and scientific talks; his great interest being the lighter items on the programmer. This fondness for music, etc. is due to Pakistani listener’s peculiar way of thinking. He regards the radio much in the same way as he regards his gramophone. In fact, we have a cultural lag in our country in the sense that our people have very limited .recreation or amusement at their disposal with the result that they would always listen to radio to amuse themselves. 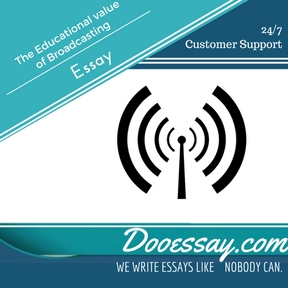 The Educational value of Broadcasting Essay

It is quite imperative that our people should recognise the educational value of broadcasting. The radio is a delightful home teacher if only one listens to it patiently and regularly. When we analyse the daily programme of a foreign broadcasting station, ‘we find that there are innumerable useful talks on literary, political, social. and economic subjects besides the daily dose of music and laughter. Eminent authors, politicians.and specialists are invited to give interesting talks on topics of general interests. Sometimes we hear a doctor telling us how to protect ourselves against malaria or smallpox; there is a short-story writer or a prominent poet, or a novelist speaking upon the different features of his craft; again there is a political leader speaking upon the agrarian reforms . The great advantage of the radio is that there is no school-room atmosphere about it. The speaker has to be careful to make his talk interesting and intelligible. He very well knows that if he is dull, he has no chance on the radio. The radio authorities enlist the best available talent in framing their programmers. Literature, science, medicine, politics, films alike form the subject-matter.

In some American universities which have twenty or twenty-five students or rolls of their colleges, lectures are being delivered to the students through the radio. May be, in future, the learned professors will be invited to broadcast their lectures from South-western, Columbia, Oxford, Cambridge and other universities and their classes would consist of students of, the entire English-speaking world. Following are the advantages of radio service.

1. Immediacy : Radio enables us to know important events which otherwise we would have to experience second-hand. Especially in a country like Pakistan, where means of communication in the villages are very limited, this will serve a great cause.

2. Reality : A spectator who tells a radio listener what he sees, as he sees it, may be more impressive than a newspaper reporter dealing with an identical matter. There are two differences: the broadcaster is on the scene and the tones of his voice communicate shades of meaning that the newspaper story, hours, days, or even months after the event, cannot convey. We may net hear only the speaker’s voice but the background the jungle cries on a hunting trip in Africa, a football game it}>America, the coronation of Queen Elizabeth II. It is now possible to broadcast from any part of the world.

3. Emotional impact : Radio brings dramatic feelings to the listeners. It has the warmth of a drama, the personal feelings of the presence of actors. It can certainly carry to the listeners all the emotional overtones of the broadcast itself.

4. Group values: It meets the problem of the dearth of teachers for a broadcast can be understood by hundreds of listeners.

5. Inexpensiveness : Used as a mass media, the cost per capital of radio-listening is very small.

This does not mean that the use of broadcast obviates the need for teachers. On the other hand, it is a good. agency which will help the teachers, and learning will become easier.

Books Which Have Influence Me
Urgent Need For A New System Of Education: Its Shape And Prospects